Tuesday, April 13, 2010 we finally got a chance to test the 5.8 GHz receiver for the UNITEC-1 ground station on the air. The weather was nice and the weak wind allowed us to be on the roof and listen for the OZ7IGY beacon 40 km away.

END_OF_DOCUMENT_TOKEN_TO_BE_REPLACED

New update of the simple receiver – version 0.6 – with the following changes:

END_OF_DOCUMENT_TOKEN_TO_BE_REPLACED

Today I felt like doing an experiment that is not quite on my TODO list – a binaural CW receiver. A binaural CW receiver is a receiver that gives a spatial feeling while you are tuning. As I understand it, you have to use stereo where the signals move from one side to the other as you tune and are in the middle when you are tuned to the frequency.

END_OF_DOCUMENT_TOKEN_TO_BE_REPLACED

Few days ago I wrote about how I upgraded the simple double side band receiver implemented in the GNU Radio Companion to a simple single side band receiver. This initial implementation used some default values for the AGC attack and decay rates. These values were acceptable; however, I wanted to spend some time trying to find better values that would correspond to Fast, Medium and Slow AGC – just as we are used to in commercial radios.

END_OF_DOCUMENT_TOKEN_TO_BE_REPLACED

Few days ago I wrote about how to upgrade the simple double side band receiver to single side band. The modification was supposed to be very simple and involved changing the band pass filter from using real taps to use complex taps. The upgrade wasn’t quite as easy, though.

END_OF_DOCUMENT_TOKEN_TO_BE_REPLACED

When I presented the Simple CW Receiver few weeks ago I also mentioned and demonstrated that it is actually a double side band receiver (it’s around 2:35 in the video). This is good for AM and FM, but can be very inconvenient for receiving CW and SSB (single side band). If the station we are trying to receive is surrounded by other stations on the neighbouring channels, these will interfere via the opposite side band. Therefore, it was time to look into single side band reception.

END_OF_DOCUMENT_TOKEN_TO_BE_REPLACED

After finishing the initial “smoke tests” on the 5.6-5.9 GHz receiver setup – in particular the KU LNC 5659 C PRO down converter, we decided to measure the sensitivity of the WBX receiver over the whole range. We define sensitivity in this respect as the weakest CW signal that:

This corresponds roughly to the weakest Morse code signal we could decode using the receiver and while it is definitely not a universal measure for the performance of the receiver, it is a good figure to compare with other ham radio equipment. Noise figure and IP measurements are available from Ettus Research.

I already had some very good results on the air with the WBX receiver and transmitter but I was excited to put some numbers on this “goodness”. 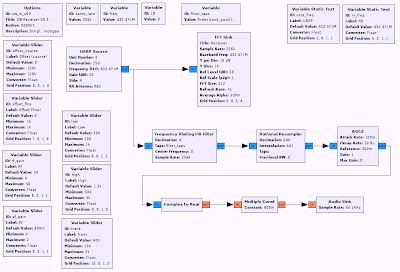 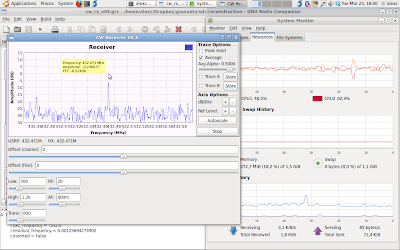 I was playing with GNU Radio, the USRP and the WBX daughterboard tonight preparing for the tests of the 5.7/5.8 GHz receiver setup tomorrow. For some reason that I can not remember, I have decided to tune in to 432.471 MHz – the UHF frequency of the OZ7IGY beacon, which is located approximately 50 km (24 mi) from me.

Watch in high definition on YouTube or get the 80 MByte .mov file.

The software was a slightly modified version of the simple CW receiver I posted yesterday, implemented in GNU Radio Companion. The modification consisted of adding a waterfall display after the band pass filter. I have included the GNU Radio flow graph at the end of the video, the one below is without the waterfall display: 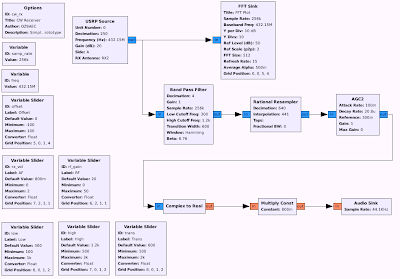 So, what do you think, how does the CW sound in a so simple software defined radio?