It was time for me to get a new computer and this time I was going for laptop with a fast CPU and sufficient Nvidia graphics that is suitable for video processing and high bandwidth software defined radios. Didn’t want ATI graphics because I have bad experience with ATI and Linux. Nvidia on the other hand has been working very well for me on Linux.

I thought of getting a new Macbook Pro 15″ with and Intel i7 dual core processor, but I ended with the Acer Aspire 5745G-724G50Mn with an i7 quad-core, 4GB RAM and a Geforce GT330M with 1 GB VRAM. The rest of this article describes my first experiences with installing and running Ubuntu Linux 10.04 Lucid Lynx 64 bit on this computer side by side with the pre-installed Windows 7.

In short, everything except external audio in/out and battery status indicator works. Default installation leaves the computer in a usable state where after some manual installation is required to get everything working optimally.

Out of the box experience

Needless to say, the computer comes with Windows 7 pre-installed. I took the opportunity to try Windows 7 for the first time ever and see if things have improved. Well, I am not impressed and will most certainly stay away from it.

Although the win 7 was already installed and activated it took me several hours to finish the required configuration, install available updates (and they still keep coming), etc. The computer is also filled with all sorts of software trial crap and it was a nightmare to disable all the stupid pop-ups and what else was harassing my so called “windows experience”. The only positive things I have noticed were the way improved Minesweeper and that you can now shut down the computer without having to click “OK” a hundred times.

I took look into the task manager. To my great surprise the Intel quad core i7 CPU is reported by the OS (both Windows 7 and Ubuntu Linux) as 8 processors! A quick search on Google taught me that it is because each core is running two parallel threads. It definitely looks cool.

Before I left the hard drive in the capable hands of the Linux Gparted partition editor, I wanted to make sure that I have some means of recovery in case something goes wrong. Well, forget about it, there is no recovery media included in the box! There is an Acer application for creating system recovery disks but you have to provide your own DVD discs and it wants 3 disks for the system and one disk for the drivers. I find this unacceptable, but I guess it is normal practice in the Windows world. I looked at the Acer website where I saw that one can purchase recovery media and since Windows 7 is really worthless to me I decided to just go ahead. But first, I ran a disk defrag which of course took an hour or so.

First I started up using the “Try Ubuntu Linux” option. From there I could start the Gparted partition editor and shrink the Windows 7 partition to 100 GB. While in gparted I noticed that there are indeed two hidden recovery partitions. I have left them untouched. After finishing the partitioning I rebooted into Windows 7 to see how it would react. It was slightly upset and wanted to run CHKDSK but it didn’t report any errors. Windows 7 was still running fine by which I mean not worse than before.

I then rebooted the computer with the Ubuntu installation CD in the drive. I performed a default Ubuntu 10.04 installation on the empty partition. After the post install reboot the computer was in a working state with graphic resolution correctly detected; however, to my great surprise the Ethernet interface was not working. I tried to execute a “system test” which revealed that it was an Atheros AR8151 V1.0 for LAN and an AR928x rev 01 for Wifi but it didn’t change anything.

This was very disappointing to me. I do not remember the last time I’ve seen an Ethernet chip that was not working out of the box. I started to worry… If the Ethernet is not working then what???

Although it was well past midnight I wasn’t ready to give up just yet. At this point I should point out that the Atheros AR928x Wifi worked out of the box so I could get on the net which made the process less painful. Unfortunately, I do not have a wireless network so I had to share my wired network connection via the Wifi in my iMac, which of course has its own quirks.

After getting on the net I installed all the available Ubuntu 10.04 updates, including new kernel, but that didn’t make any difference on the Ethernet side. At least I could now get the restricted Nvidia driver.

Next step was our common friend, Google, which lead me to this thread on the Ubuntu forums. After careful reading it was clear that there already is an Atheros Ethernet driver in the kernel but it does not include support for this particular device:

I went on and downloaded the driver from the Atheros website – currently being the AR81Family-Linux-v1.0.1.9.tar.gz file. It is important to put the package in it’s own folder. After that, I simply did a “make” and “sudo make install” from the top level directory to where the package has been unpacked. After reboot the network was up and running, even configured automatically during reboot process.

Now I just have to remember to do this every time the Linux kernel is updated.

Both frequency scaling and turbo-boost works. These two things are different in that frequency scaling is just the usual power saving function that reduces the CPU frequency below the nominal 1.6 GHz, while turbo-boost performs overclocking up to 2.8 GHz. The Intel website has more details about the processor.

A special tool is required to check turbo boost activation. I used the i7z reporting tool that should work for i3 and i5 processors as well: 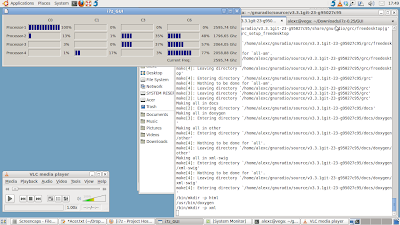 I do not know much about this turbo boost technology to provide a proper assessment, but it certainly appears to be working properly.

Playback using the built-in speakers works out of the box. The internal microphone and external audio in/out do not. It looks like there are two audio devices in the computer:

I suspect the Nvidia one is used with the HDMI output? I didn’t have time to figure this one out so it’ll have to wait. Any info and pointer is appreciated.

After reading a thread on the Ubuntu forums I have installed linux-backports-modules-alsa-lucid-generic which fixed the audio issues and even got an addition audio output device, which is the Nvidia HDMI out! I have not been able to test the HDMI but the Intel HD Audio device now works very well.

I have now 3 options for output:

In both cases the audio is recorded and the input level can be adjusted using the gain slider in the mixer application, which is satisfactory for now.

Basic graphics works out of the box with correct LCD resolution. After installing the proprietary Nvidia driver from the Ubuntu repository, external graphics can be used as well. Both the VGA out and HDMI out works very well. I tested the VGA out using a 19″ HP monitor at 1280×1024. For HDMI I used my HDTV which worked at both 1920×1080 and 1280×720. It wasn’t very good at full HD but I am convinced that is due to cheap TV. I’ll try this with a good TV as well and post the update in the comments.

Basic power management worked right after installation – at least the fan was not running all the time. However, the battery indicator applet was not  able to read correct state. It will always shows as if the battery iss charging and the charge/discharge profile graphs are flat! This is due to faulty BIOS and version 1.15 released 2010-08-16 fixes the problem. Get the latest BIOS from the Acer website. Thanks to Daniel for this info!