Small BoomBox and mojo to go… This is how NN6CW and many others describe the K1 – a small, lightwiegth QRP transceiver kit from Elecraft. The K1 has been a legend ever since it came out. It is easy to build, looks very professional, has a superb user interface, and offers great perfomance. 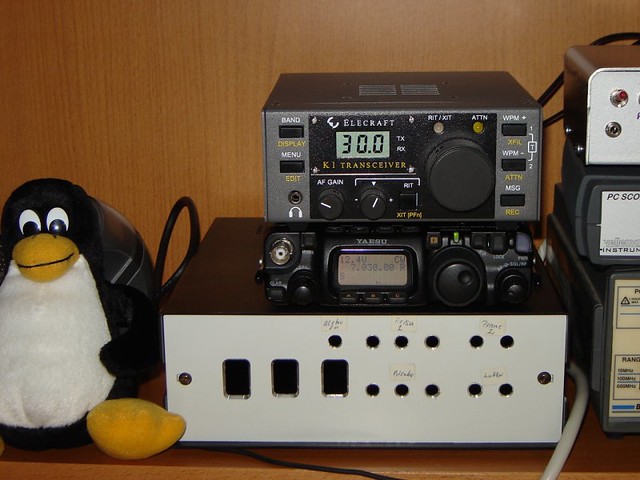 The K1 has more features than I care to write down. Instead of trying to remember all of them I will just mention those, which I find particularly interesting:

The K1 is a compact QRP CW transceiver capable of operating on any amateur band from 80 to 15 meters. It can be built either as a two band transceiver for any of the 80, 40, 30, 20, 17, and 15 meter bands, or as a four band transceiver for 40, 30, 20, and either 17 or 15 meters (chosen at build time). Band-specific parts are on a single filter board plugged on the main RF board, thus it is even possible to switch between a two band and a four band board.

The K1 has a single-conversion superheterodyne receiver with a 4.915 MHz IF. Down-conversion minimises complexitiy and receiver noise, and the low IF frequency results in good CW selectivty with a 4-pole crystal filter. The IF has variable bandwith and can be adjusted anywhere between 200 and 850 Hz. The receiver uses actrive mixers that helps keeping the current consumption low (70 mA with backlight).

The transmitter has three stages of amplification. Maximum power output from the final class C amplifier is between 5 and 7 watts, depending on the operating frequency and the supply voltage. All T-R circuitry is solid state without any relays, resulting in very smooth QSK.

All K1 functions are controlled by a microcontroller unit (MCU). This has allowed the designers to include many convenient functions and an outstanding user interface. The K1 is very clever in the sense that it can detect which band module is used, and whether the optional KAT1 autontuner is installed or not. The MCU also functions as instrument during kit assembly and alignment – very clever!

The K1 uses a classic VCO for tuning running around 3 MHz. The builder can select between 80 and 150 kHz of band coverage. Tuning is done with a 10-turns potentiometer. The three digit display on the front panel can display the operating frequency, supply voltage, output power, and SWR.

Now, if you please, you can go on and read about my adventures during building the K1.