OZ2ABA, OZ6BL, OZ9VQ and myself met at AMSAT OZ HQ around 17:00 UTC and were looking forward to first AOS over Europe at 17:41. Earlier on the day I learned that Japanese ground stations have been successful receiving data from UNITEC-1.

We were using the 90 cm dish in the beginning but I learned already Thursday the UNITEC-1 was moving away faster than I first thought. Already during this first mission day it would be more than 350.000 km away. According to my link budget we should still have been able to hear UNITEC-1 with the 90 cm dish, but we received nothing. 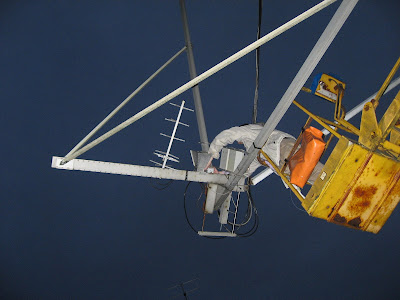 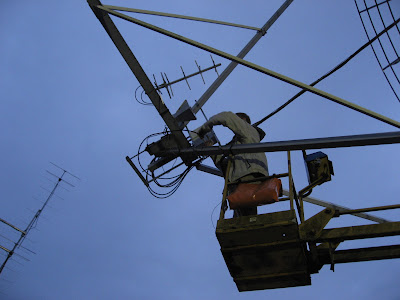 The reason we didn’t use the 7 meter dish to begin with was that we were uncertain about the position of UNITEC-1 and decided to use a smaller dish with wider beam width. But the successful tracking by the Japanese stations showed that the predicted positions were good enough for them to track using a 34 meter dish!

After moving the LNC we pointed the 7 meter dish towards the OZ7IGY beacon and we had booming signal: 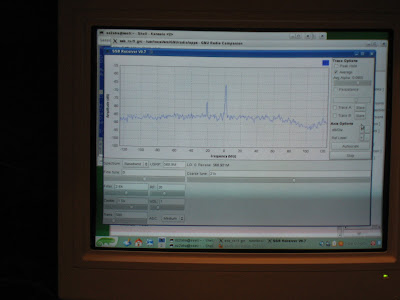 Still nothing heard from UNITEC-1…

The fact that we could not hear UNITEC-1 was one thing. It have been something wrong with our system. The really bad news was that our friends from AMSAT DL using the 20 meter dish in Bochum could not receive it either. They checked on several occasions that they could hear both PLANET-C and IKAROS and they also tested their receiver chain on 5.8 GHz. We also checked both our pointing and receiver using the OZ7IGY beacon.

We spent the whole evening scanning using 250 kHz receiver bandwidth, sometimes more. There were also plenty of waiting time between the transmissions slots where we could discuss different ideas to try. Still no luck.

We decided to meet and try again Saturday at 17:30 UTC also hoping that the Japanese ground stations will be able to receive it again.

OZ2ABA and myself met at MASAT OZ HQ around 17:15 UTC. No good news from the Japanese ground stations during the morning.

The only hope left was that it has drifted far away in frequency and/or the transmission schedule has been offset. Therefore, we decided to listen all the time, including the breaks between the downlink slots, use wider bandwidth (2 MHz) and scan up and down in frequency. Our receiver could cover 5.6-5.9 GHz and we could as well take advantage of it. The nominal transmission frequency was 5.84 GHz and we went up to 5.86 GHz and also several MHz down – still nothing.

The Bochum team did not receive UNITEC-1 either but were regularly checking their system with other deep space probes.

We decided to leave it at that since UNITEC-1 seems to be lost and we didn’t see any purpose in trying it further. Of course, should somebody suddenly receive UNITEC-1 we will be ready to listen again, but it is flying away very quickly and will be out of range for our 7 meter antenna in a few days.