Few days ago Michael Dickens announced that the GNU Radio packages on MacPorts have now been updated to 3.3.0 and so I took this opportunity to try it. I didn’t have MacPorts installed so I had to start from scratch; however, installation was quite straightforward because the dependencies are resolved automatically. All I had to do was to download the latest MacPorts dmg and then execute the command

then let it run overnight. It takes a long time since MacPorts builds everything from source. On my iMac it took more than 6 hours. Note that gnuradio is a meta packages that depends on all GNU Radio components.

After installation PYTHONPATH has to be set up. I did that by including

in my .profile file. After this I could execute the audio examples. To get gnuradio-companion working I also had to add 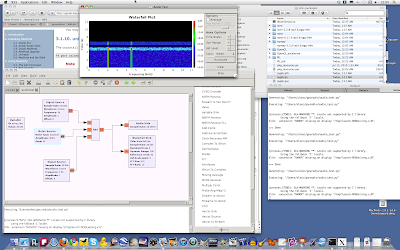 Note that it is using Gtk+ with X11 because that is what is installed by default. According to Michael it should be possible to switch to Gtk+ with Quartz backend. I will certainly try then once I get more used to working with the MacPorts.

I also did a quick try of the gr-qtgui using the pyqt_example.py from the source tree; however, this did not work as I have reported here. Further attempts to make it work were unsuccessful and led me to conclude that something is wrong with the package. This was confirmed by Michael who will update the package.

It was already very late and I didn’t have time to try the USRP. According to Michael’s post above it should just work on OS X and does not require configuring udev or anything. Looking forward to try it tonight. If it works well I can use the Mac to receive SSTV from the International Space Station on Monday and Tuesday next week. It’s almost two years ago I last tried that, see video below.