Thanks to the European Space Agency (ESA) and the Mars Express mission, we might have an opportunity just around the corner for doing big science with GNU Radio and the USRP!

On March 3, 2010, Mars Express will visit the Martian moon Phobos by performing a close flyby. According to ESA, the ESOC ops team is working with a number of possible scenarios, including one that would take the spacecraft to just 50 km above Phobos. At that distance the orbit of the spacecraft is expected to be influenced by the gravitational pull of Phobos. I knew this already for about a week when I first read it on the Mars Express Blog but it was first today that I realized the opportunities this event offers.

According to today’s post on the Mars Express Blog, NASA will support the fly-by with their 70m dish at Robledo in Spain:

Wait a minute… They will record extremely precise Doppler data? In other words, measure the Doppler shift of the radio signals transmitted by the spacecraft, right? We could try to do that too!

A quick research into the technical details of the communication equipment on-board Mars Express revealed that it has a redundant transponder where each unit contains an S-band and X-band receiver and transmitter. X-band is amplified by TWTAs to an RF power output of 65 W. The RF distribution unit (RFDU) connects the receivers and transmitters with the antennas. It also contains the S-band amplifiers (5 W RF power output). A 1.6 meter dish, receives uplink at either X-band or S-band and radiates simultaneously X-band and S-band downlink. The low gain antennas receive and transmit at S-band only. My source was this interesting paper. 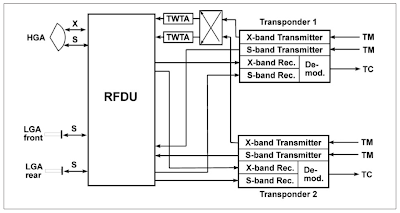 So, 65W RF into a 1.6 meter dish… That’s quite a lot and might just be possible to receive using the 8 meter dish of OZ7SAT! The question is of course which configuration will be used during the flyby?

Without hesitation, I asked @esaoperations via Twitter and I got an answer within a few hours: They will be using the high gain antenna on both X and S band with no modulation in order to get the cleanest possible signal. Wow, this is beginning to sound too good to be true! We don’t have to worry about signal bandwidth or anything, just a clean carrier. This is definitely worth pursuing. At this point I would also like to thank @esaoperations for answering my question.

The status here and now

Obviously, we should be aiming for receiving the X band signal since it is the most powerful. If it’s not working out we can fall back to S-band.

Here is a very nice photo of the 8 meter antenna of OZ7SAT: 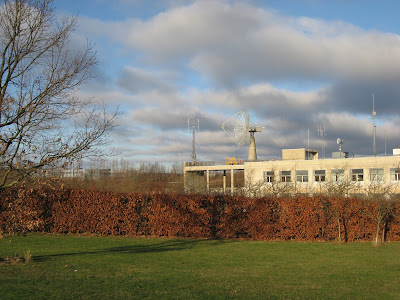 And hopefully you remember my USRP with the DBSRX receiver: 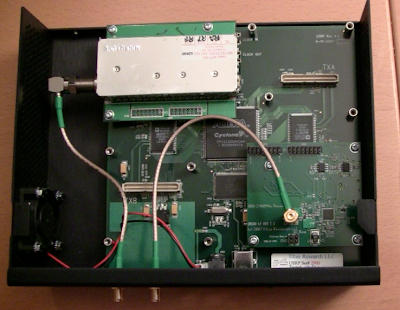 It was initially created for an LRO reception experiment last year that has not been concluded due to changing circumstances. Today, the setup can serve as a high performance portable S-band receiver.

That’s not all. We still need:

Putting the LNA between the feed and the LNC would have the advantage of improving the overall system noise temperature, provided that we can get an LNA with lower noise figure than the LNC. However, such an LNA might be more expensive than one for the S-band (already have!) or below. I’ll have to do the link budgets and see which configuration will give the best performance.

In case the X-band setup doesn’t work out, we still have the possibility with S-band. Remember, I already have the setup with G/T = 2.6 dB/K when using the 60 cm dish and that will improve if hooking it up to the 8 meter dish. However, the 5 W transmitter power on Mars Express makes doubt that we would be able to receive anything. A link budget will tell!

What can we expect?

At this time I do not yet have a full understanding of the parameters involved but here is my understanding so far (please do tell me if you know more): Mars Express will get so close to Phobos that the gravitational effect from Phobos will influence it’s orbit. The question is of course how big perturbations we are talking about. I do not know (yet).

Obviously, there is a reason why NASA will use their 70m dish for supporting the event and the reason is not that they like to brag to ESA with their bigger antennas. They do it because the perturbations will be so small that they need everything they have in terms of signal strength, stable and accurate frequency reference, etc. to measure the small deviations in Doppler shift. To be honest, I doubt we can get anywhere near the required precision and accuracy but as I said, I do not have the numbers, which is why I pursue it until I know.

I like to think about this as an experiment similar to one we have carried out while I was studying at the university. We decided to use the university’s 50 cm telescope for measuring a planetary transit around the star HD 209458. We did that by measuring the magnitude of the star over time while the transit was expected to occur. These were our measurements: 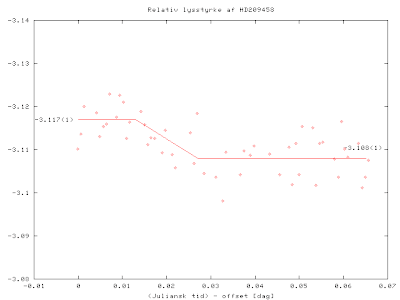 As you can see, the results were by no means scientifically conclusive (there is a reason why we omitted the error bars ;-); nonetheless it was sufficient for us to confirm what we already knew. As students, we could reproduce the results of scientists!

In the best case, this experiment will give similar results. We get a decent signal from Mars Express and we can record the Doppler shift over time during the flyby. With a little good will, we might be able to see that there are perturbations in the Doppler shift but no way we could see that if we didn’t know what we are looking for.

The analysis and progress over the coming days will indicate which case we are closest to.