It has been a busy night but I have made good progress with the Gumtix Overo Fire. Today’s report is action packed with kernel panics, painful downgrades and a working webcam.

Yesterday evening I was beginning to get kernel panics from the board and I did not have time to resolve the issue. Although I could reboot the board, neither graphics nor Ethernet worked after reboot. I removed all cables and power cycled everything which brought back graphics and Ethernet; however, mouse and keyboard were no longer working! After a new reboot the behavior was random with respect to graphics, Ethernet, keyboard and mouse.

It was a good idea to leave it be and take a fresh look at it today – I could see the problem right away: 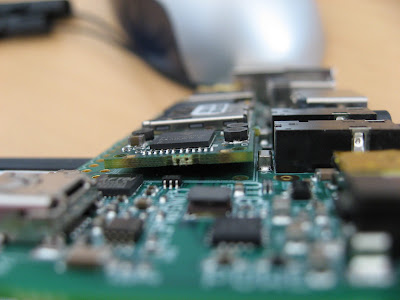 I need to get those tiny screws but I have no idea where. I guess they have to be nylon or plastic and no more than 1.6 mm.

Once the Gumstix Overo Fire was up and running again, I made the incredibly stupid decision to execute an “opkg upgrade” – for some reason I was expecting it to upgrade the system or do nothing, instead it downgraded the system from 20100909 → 20100824 and this latter did not work very well (otherwise I might not even have noticed the downgrade).

Back to the host computer and copy the 20100909 images onto the microSD again… Of course all this takes time and also the configuration during the first boot is quite painful to sit and wait for at 10 PM, but at least I got it back up again. I am still to figure out whether the opkg behavior is stupid or whether I am mixing packages from different repositories (I am using images from Sakoman).

Already before the painful downgrade I knew that my Logitech QuickCam Pro 9000 is working in that it showed up as /dev/video0.

I tried the cheese capture application, which behaved as if it was capturing, but all I got was black screen. So I just went on to trying Gstreamer since I am already quite familiar with it. After some initial exercises with the videotestsrc, I had the live webcam image on the screen! 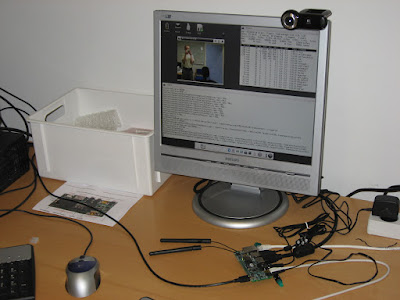 This was simple capture and display and this is pretty much as far as I could get. I did try some other things such as timeoverlay and saving frames to JPEG files once per second. Unfortunately, both of the elements pushed the CPU load so high the the pipeline choked. I believe I will have to install the gstreamer-ti plugins manually in order to get the hardware accelerated plugins.

I also measured the surface temperature on the OMAP3530 (or more specifically the POP memory) just to be sure that it wasn’t boiling. Both the CPU and the WiFi/BT chip are running very hot, but as far as I can tell this is their nominal temperature: 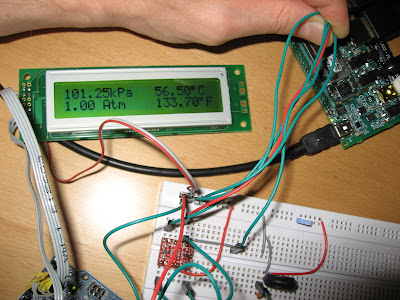