A few months ago I started looking at various options for omnidirectional antennas with circular polarization for satellite communications. I came across the TA-1 137 MHz turnstile antenna from Wimo, which looked like an interesting option for a reasonable price.

The TA-1 turnstile antenna caught my attention because:

I was specifically looking for something that has some gain at low elevations. As you will see from my results, this antenna does.

I decided that the best way to test the antenna is to use it on-air, somewhere without too much interference. So, I took it with me while I was visiting my parents during Christmas break in Dec 2017. They live in an RF-quiet area in JO45KG, with a good view of the horizon.

Unfortunately, the weather was very bad with lots of rain. It wasn’t until December 31st that I could start testing.

I mounted the antenna 3 meters above ground using an improvised “tilt tower” (the “tilt” functionality was only used for servicing and not for pointing the antenna). In addition to the 1.5-meter RG58-type coax attached to the antenna from the factory, I used a 3-meter long high-quality coax with SMA connectors at both ends. This cable was connected directly to an Airspy Mini without any additional LNA or filters.

I only had a windows computer at my disposal, therefore, I was using SDR# to monitor the signal and record IQ data to disk. 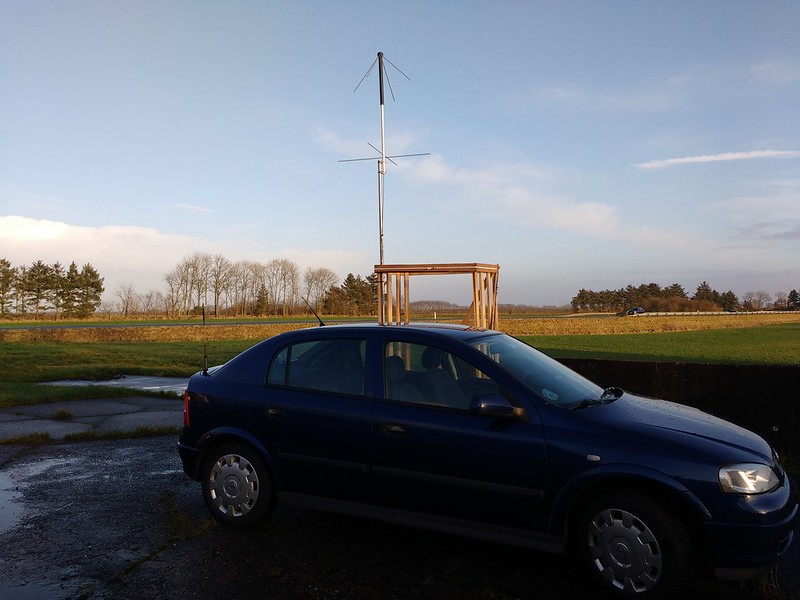 The antenna came with everything needed for assembly, including two mounting clamps. 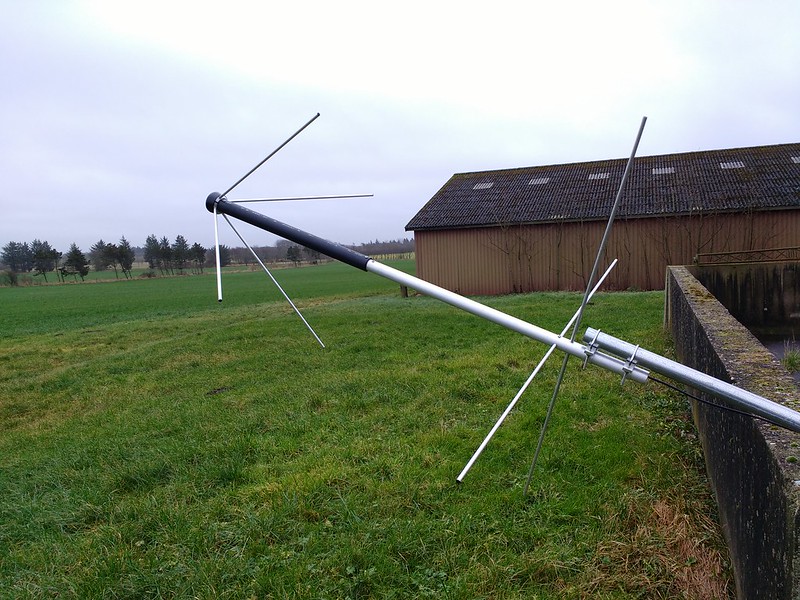 The four dipole elements have threads on one end and are easily screwed into the top piece. The reflectors are two long pieces and are fastened using small “wood screws“. Here you have to be careful to properly align the directors, and also not to damage the coax inside the tube while tightening the sharp screws. I will probably modify this to use two long screws that go all the way through. 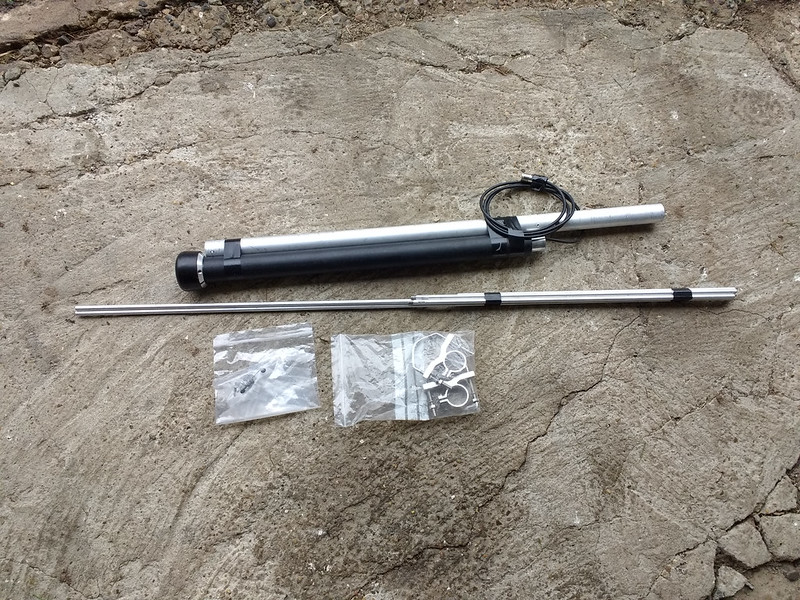 You can see more photos in this photo album on Flickr.

I tested the antenna using NOAA APT, Meteor M2 LRPT, and a few amateur radio satellites transmitting in the 2-meter band. For each pass, I have included one or more screenshots, a full span spectrogram, and decoded data if available.

This was a very good pass with max elevation above 70 degrees. Note that the orbit number has wrapped around recently… But around what, 65535 or 99999? 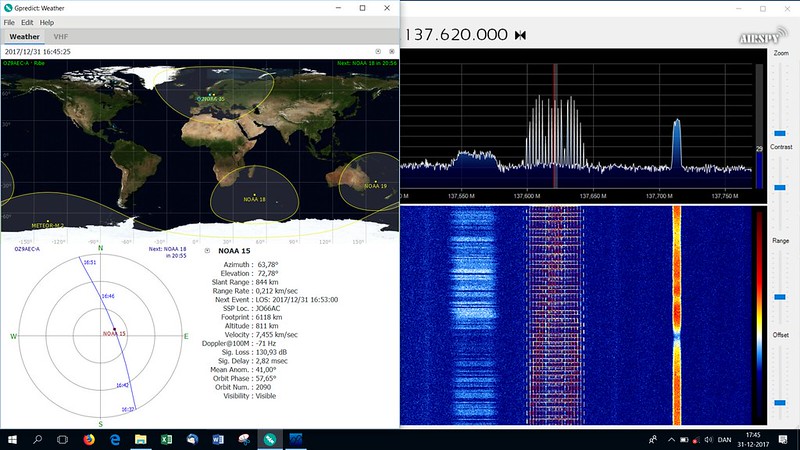 Good reception from start to finish. The signal becomes weak towards the end as the satellite moves behind the building that can be seen on this photo. 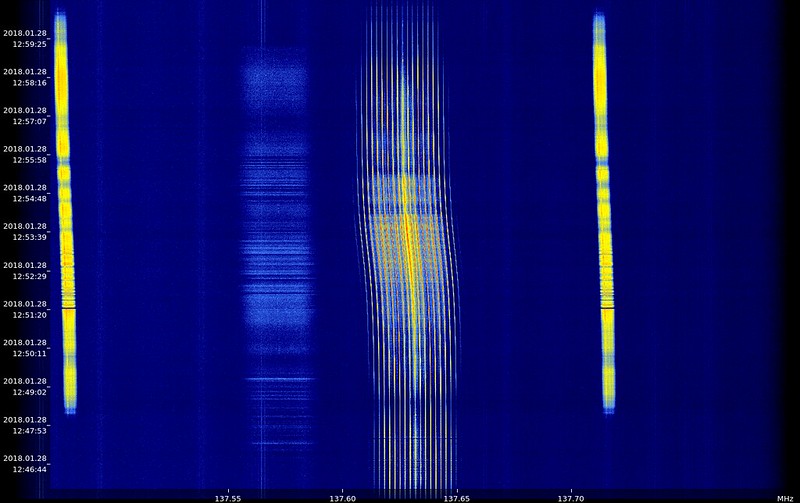 Note that the time on the spectrogram is the time when I replayed the IQ recording to generate the spectrogram. The date and time of the recording are available in the this Flickr album together with more screenshots.

The decoded APT image is included below. It was after sunset, so the image only contains IR channels. 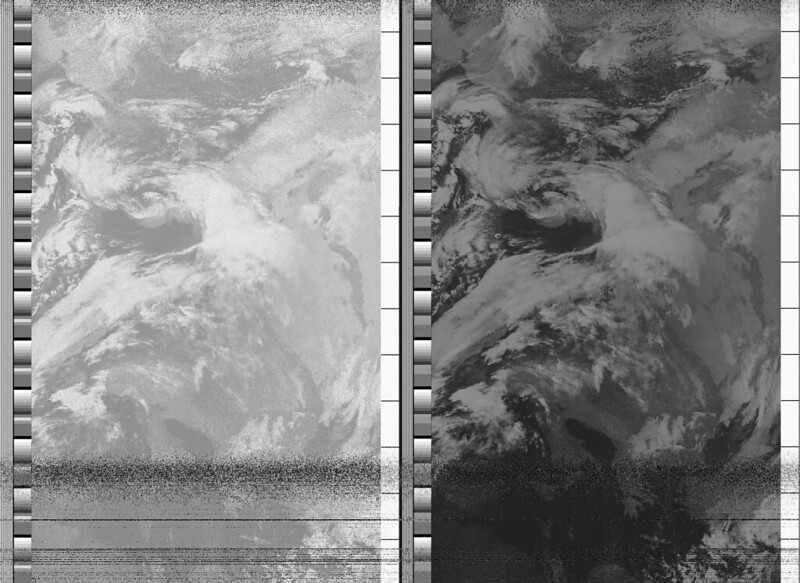 A medium elevation pass “after dark”. 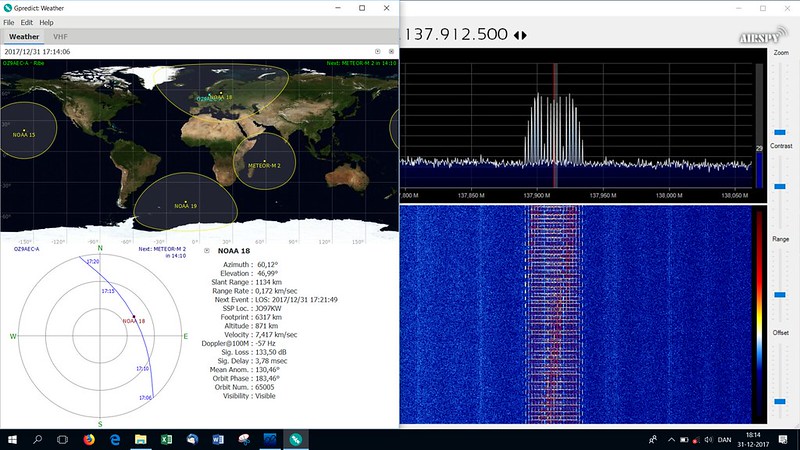 Good reception from start to finish, though again with the signal becoming weaker as the satellite disappears behind the building towards North. 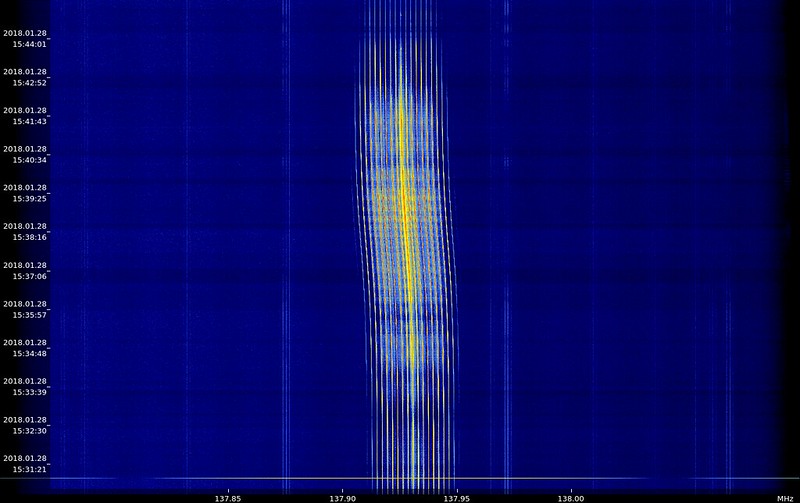 The resulting image is also very nice, even though it still only contains IR channels. 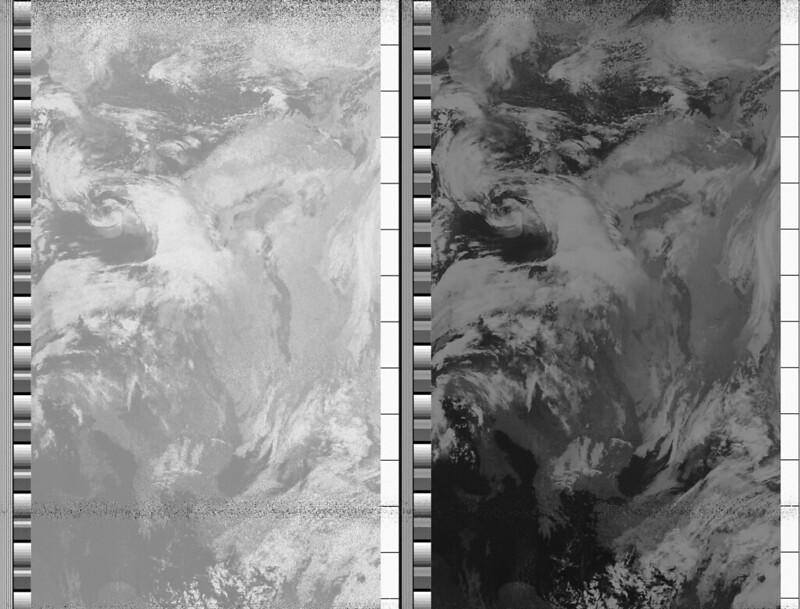 More screenshots and data in the this Flickr album.

This was a low elevation pass where the satellite didn’t come above 22 degrees elevation. 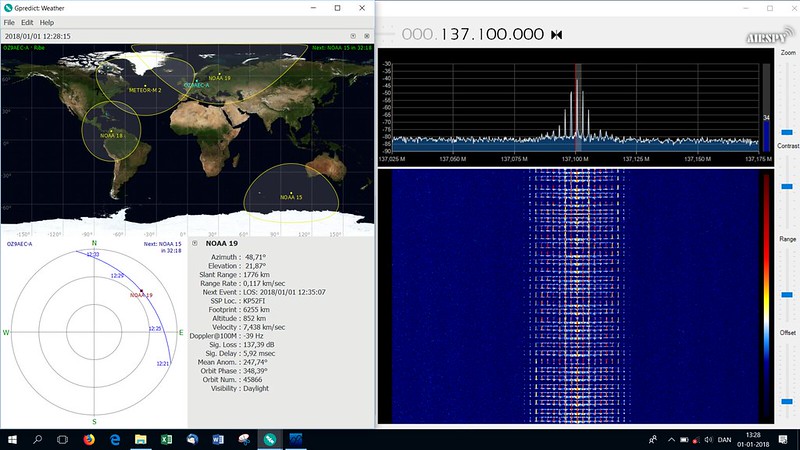 Still, a very good reception during the whole pass and a nice image decoded from the signal. 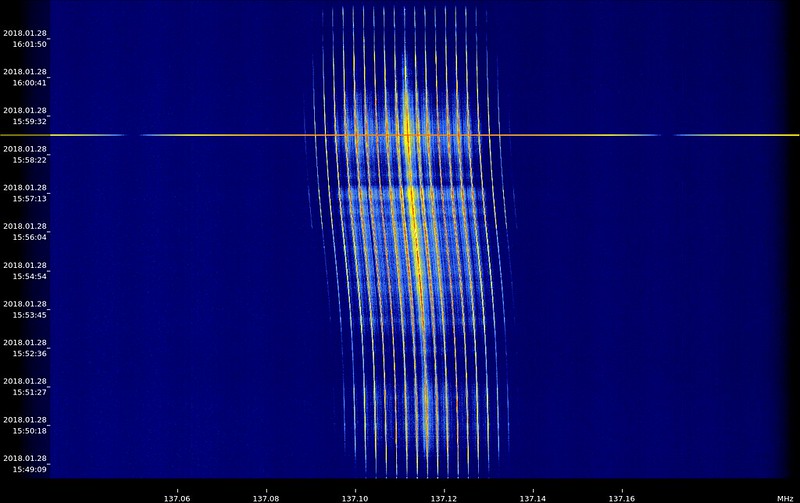 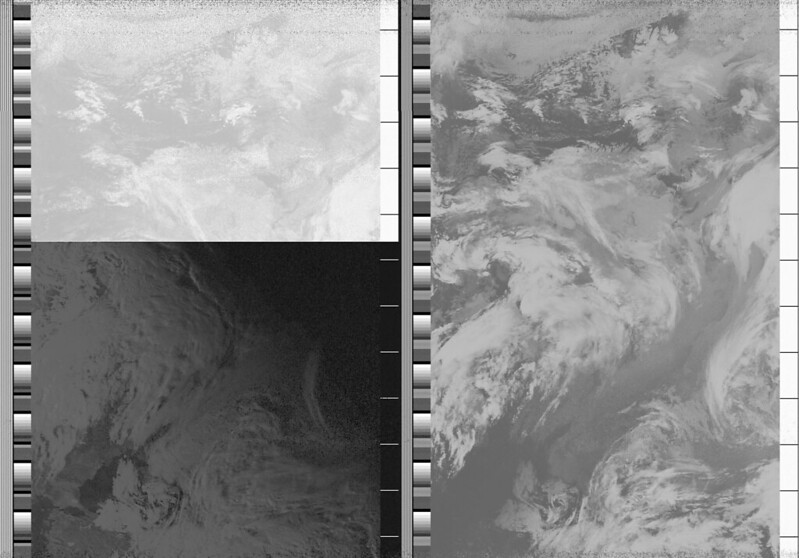 We can see that the satellite switches sensors as it moves from daylight into eclipse.

More screenshots and an audio spectrogram in this Flickr album.

This pass was as good as it gets, with elevation up to 85 degrees. 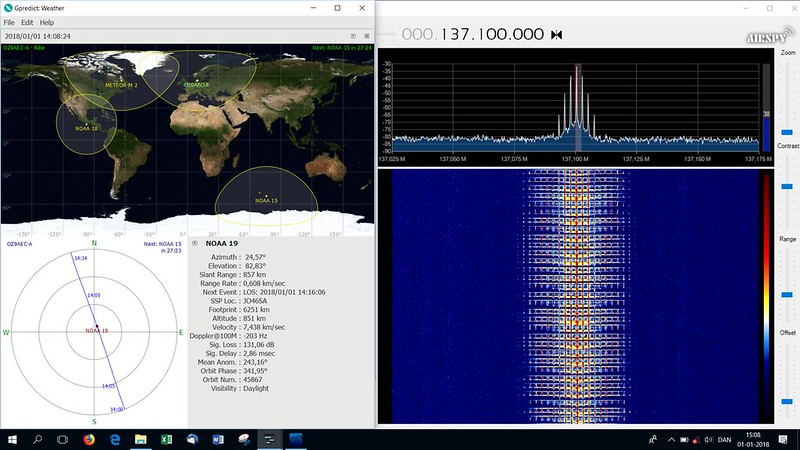 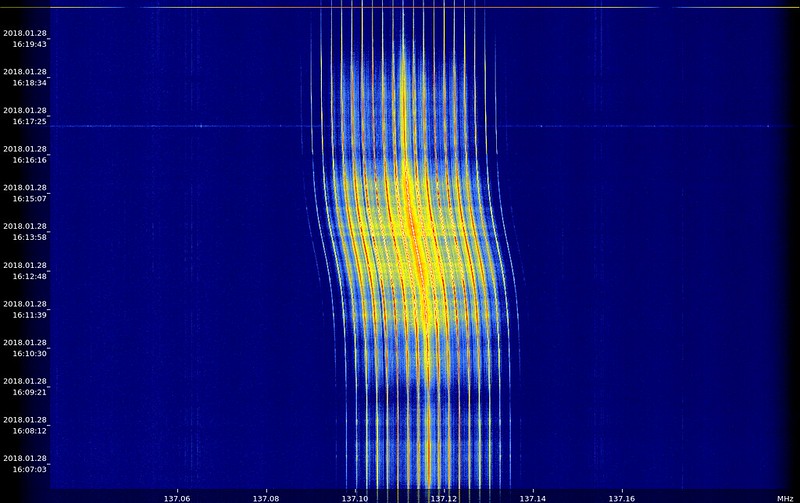 This time I received a good visible image, even though the satellite still switches sensors as it moves into eclipse over the polar region. 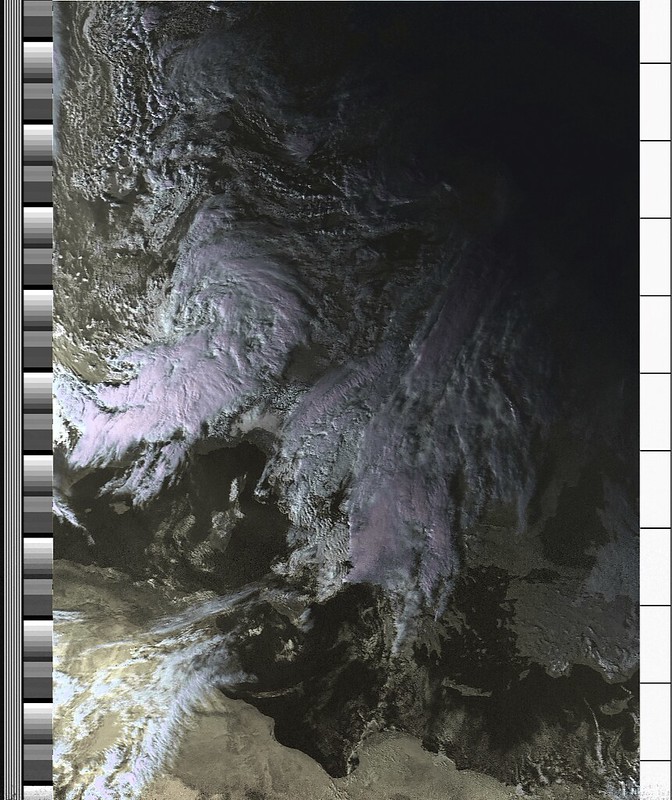 A very good pass with max elevation above 60 degrees. 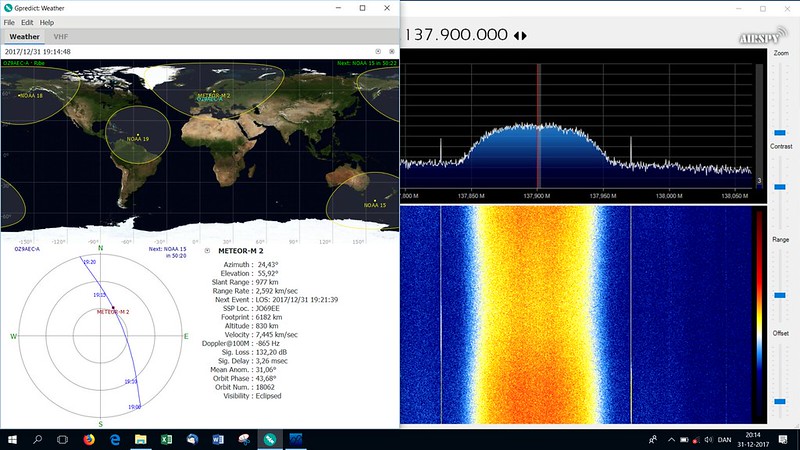 Good reception from start to finish. Not sure what causes the signal to drop around the middle of the pass. I observe similar behavior using other setups, so I suspect it is the satellite rather than the antenna. 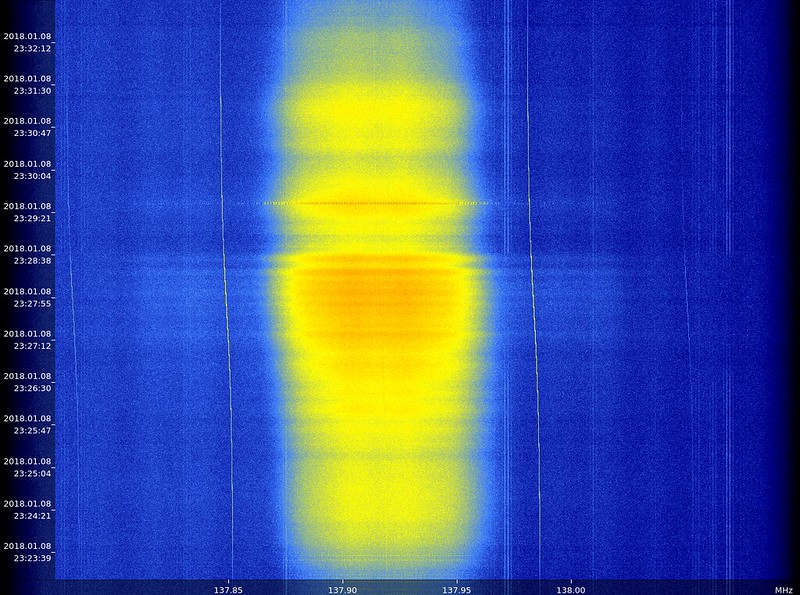 More screenshots and pass data in this album on Flickr.

Another good pass with good reception from start to finish. 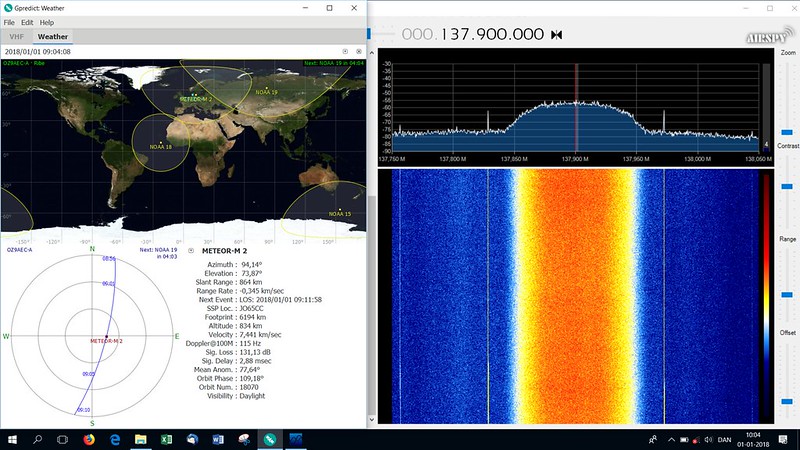 We can even see the end of a NOAA-18 pass at the beginning of the spectrogram. 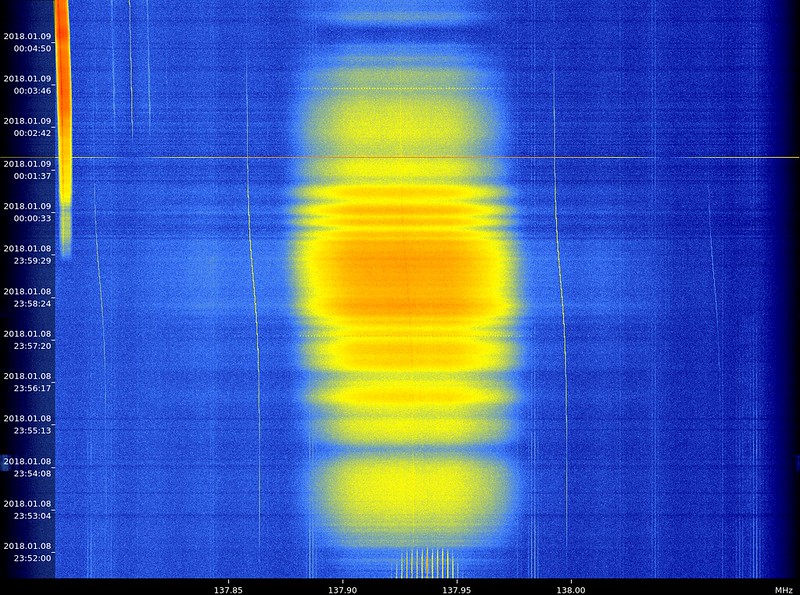 More screenshots and pass info is available in this album on Flickr.

This was a medium elevation pass with the highest elevation around 40 degrees. 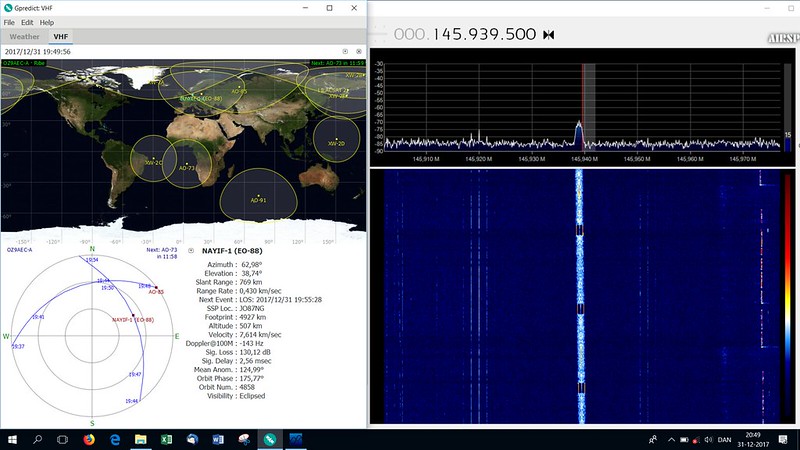 Also visible in the spectrum is the FM downlink from AO-85, as well as the linear transponder downlink from CAS-4B. It’s getting crowded in the 2-meter satellite band. Although the NAYIF-1 BPSK beacon does not appear strong during the whole pass, we have to keep in mind that it is transmitted using 30 mW of RF power over more than 800 km distance! 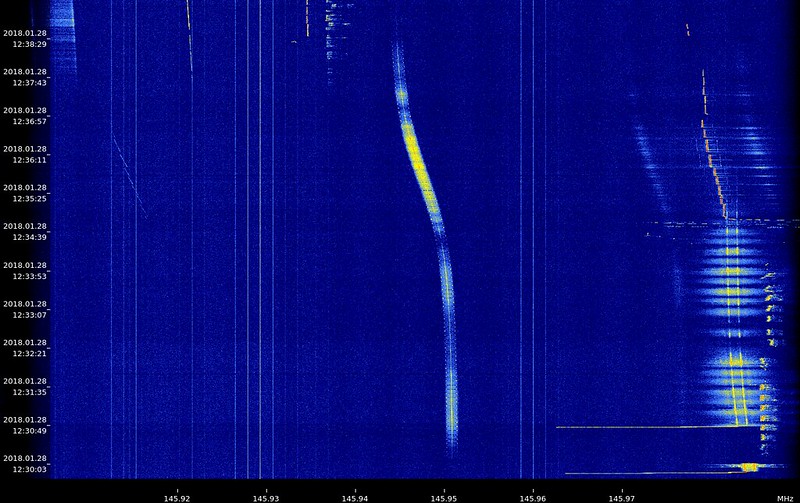 More screenshots and data in this album on Flickr.

A very good pass with elevation up to 60 degrees. 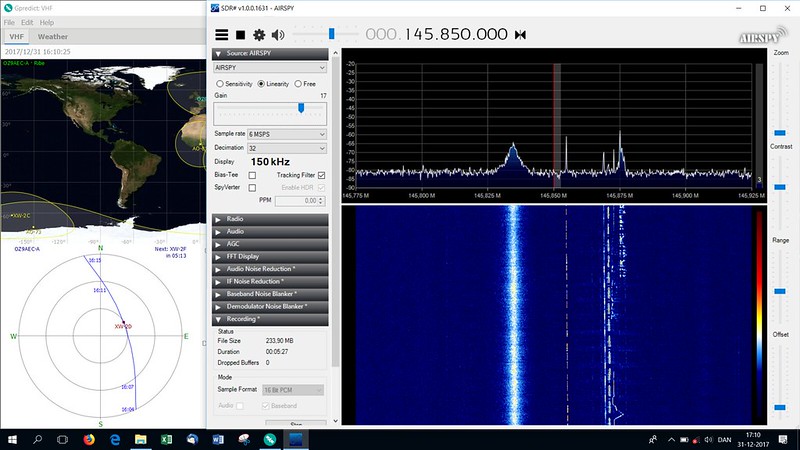 Both beacons (CW + GMSK) and the linear transponder is clearly visible. The CW beacon is copyable from AOS to LOS. 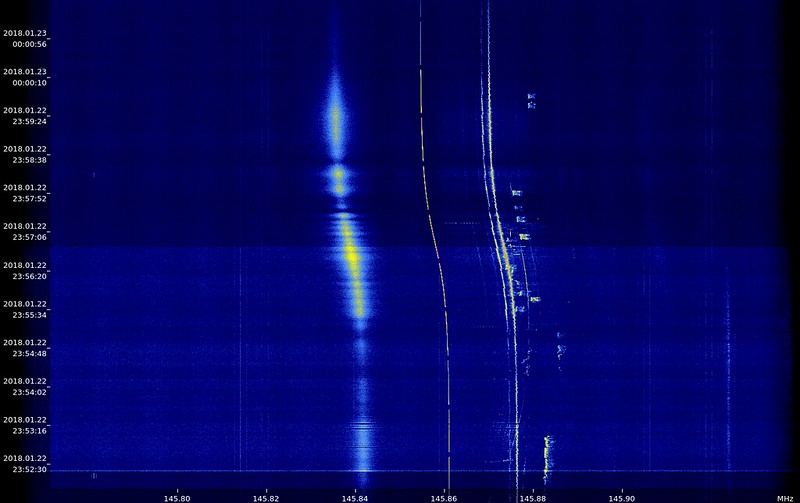 More screenshots and pass data is available in this album on Flickr.

From my point of view the conclusion is clear. The TA-1 Turnstile antenna from Wimo is an excellent antenna for LEO satellite reception in the VHF band, in particular, if you want some gain at low elevations, where the satellites are farthest away.

The antenna is easy to assemble, although it would be nice if the full instructions were translated into English, not just parts of it. The antenna covers 137 – 152 MHz, thus usable for both weather and amateur radio satellite reception. Judging from the datasheet, it should also be usable for transmit in the same frequency range. This is to be tested in a future session.

On the less positive side I can mention that I really don’t like the use “wood screws” to fasten aluminium parts. I think it limits how many times you can assemble the antenna. I prefer using normal threaded screws, even if it increases the cost a little.

Also note that the antenna seems to have some drop in gain around 10 degrees elevation. This is not unusual for omnidirectional antennas and I don’t worry about it at all, I just wanted to mention it so that people don’t expect a flat transition from 4 dB gain at low elevation to 0 dB gain at zenith.

All in all, a very good antenna for the money.

All pictures, screenshots and other data collected during the tests are available in my Wimo TA-1 VHF Turnstile antenna collection on Flickr.